Recently, I've been rather bubbling over how excited I am to have the Classic99 debugger working for ColecoVision software, and in my last post I promised to talk about that some. So I think I will. 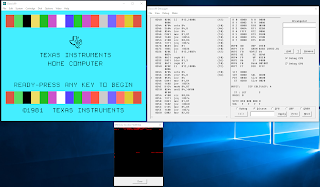 While still lacking a number of features I'd really like, it really is my favorite retro-debugger. Since I wrote it, I'm clearly biased, but I also worked to get the features I actually need into it. Some of these features - I'm really baffled that other emulators DON'T have them.

The first feature, and nobody seems to do this, is real-time view. While the system in running, you get a real-time view (updated roughly 10 times per second) of whatever window you are looking at. You can see the disassembly flying by (very useful for seeing tight loops), or you can watch memory in real time (looking for a RAM access pattern - here you go!) All the while, the current system registers are ALWAYS available.

In addition, while less often useful, the commands that let you ALTER memory or registers are available at all times. Usually it's more useful to breakpoint first, but sometimes you just want to end a timed delay early, and you can just write the register directly without freezing execution. Even on the Coleco, which has far fewer registers than the TI, this is useful. 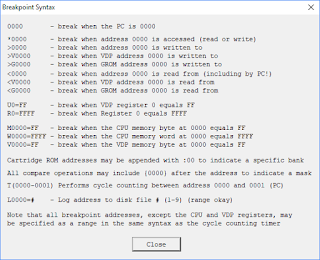 The second feature is flexible breakpoints. Again, there's more to do here, but I can break on PC, or I can break on read or write or either to a particular address in any of the system memories, or I can break on a particular value being written to a target memory. In addition, in case I don't know the exact address, any memory can be a range. I can even look for single bits. Many of these options would be difficult to implement on real hardware, but an emulator doesn't know the difference between real and simulated.

The breakpoint system even allows non-break functions, in this case it can count cycles between two addresses for performance monitoring, or even log all writes to a particular address to a disk file! Want to capture a speech pattern or a song, this can do it. 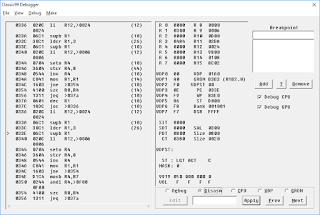 The ability to single-step and immediately see the result of an instruction is invaluable. This one at least, most debuggers do implement. Classic99 of course lets you alter any register while paused or running, including the program counter, which allows you to go back and retry a piece of code with different inputs, or even change the code on the fly (although you need to enter the hex bytes manually.)

While still rough, Classic99 also allows debug of both the host CPU and the F18A GPU at the same time.

Within an hour of having the debugger available to ColecoVision software, I was able to troubleshoot a problem with the emulator's implementation of NMI, and observe the memory access patterns of a number of Coleco games. I even engaged in a little bit of cheating on a favorite game (Antarctic Adventure: time remaining 0x60e3 (16-bit BCD, maximum value C60E3=9999), distance remaining 0x605e (16-bit BCD, finish level now C605E=0100)).

That's really all I have to say. The main deficiency I see in other debuggers is the lack of real-time view, which really slows me down. Stability seems poor on some, as well. At the same time, there are features in other emulators I also plan to implement, like sprite and tile views, audio waveforms, and more.

I use the Classic99 debugger almost all the time, to debug my own code, to reverse engineer others' code, and even to debug the emulator itself. It's an invaluable tool that too many emulators treat as a secondary add-on.