In order to advance on the hardware side of this, I learned KiCAD and laid out two PCBs. One is the intended final board, and one is a prototyping board that accepts the same ZIF socket for the flash chips as my EPROM programmer does.

I got the PCBs back from OSH Park, and there are a few screwups... 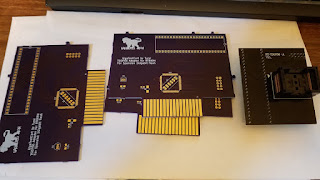 I haven't checked them electrically yet, but there are two main issues - one is OSH's and one is mine.

The OSH one is those connector tabs you see all around the board. I wouldn't generally care, but they put one on the end of the cartridge connector. This has two side effects. First, I need to file it off to make it fit into the port (okay, whatever).

Secondly, and more importantly, whatever method they use to break apart the boards physically damaged the connector: 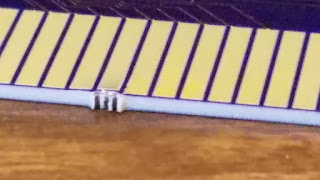 It's a little hard to see in this photo, but the board is coming apart at the top layer and has actually torn a millimeter or so between the traces. You can most easily see it in the distortion on the one trace.

There's no similar damage on the bottom, so I assume that's the direction they flexed the board to break it apart from the next one.

I'll have to drop them an email to ask how to avoid that on production. It's likely I can use at least one of these boards for prototyping and testing.

The other problem is I apparently didn't measure out the adapter board correctly, because it's completely wrong. It has two parts - the large DIP footprint and the smaller 10-pin header. I managed to make the holes too small for the DIP part and use the wrong pitch and misaligned the 10-pin header. GO ME!

I have three of the adapters, just in case, so I think I can fake it by bending the very long pins on the 10-pin header, and I'll just have to force it or grind the pins to fit the DIP (or use my I-do-this-every-time trick of soldering smaller leads onto the pins... sigh. Someday I'll remember that sockets use thicker pins...)

Anyway, in the middle of moving, but I need to try and test this out as quick as possible, because the next challenge I'm facing is that the 1gigabit chips are obsolete and getting hard to find. OH BOY.

Edit: As Captain C used to tell me: 'Never underestimate the power of force!' I literally used a hammer. ;) 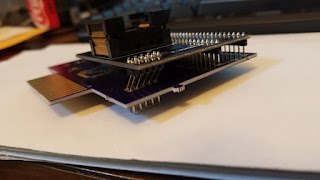 Posted by Tursilion at 4:32 PM No comments: