I'd been having some trouble with Overdrive on my very abused Rock Band guitars -- to the point where one of them (an original RB1 unit) all but quit working altogether.
I took it apart to see what could be done, and was surprised to see that the tilt sensor actually used little metal balls in a can (this is why the guitars rattle when you shake them). It used two of the sensors wired in series, probably to better filter false positives caused by vibration.
Sensors used were similar to this: https://www.adafruit.com/product/173 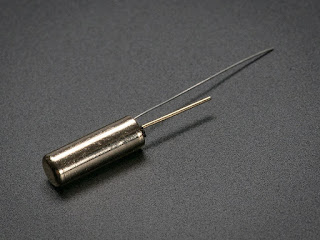 Some testing suggested that one of the sensors was barely responding at all anymore, so to get it going, I shorted one of the sensors out, so that only the other one was needed to trigger. This only sort of worked and got us through the evening.
I ordered a set of mercury tilt switches to replace them. I got a set of 10 little ones from Amazon for $6, so I could install two in each of my guitars. https://www.amazon.com/gp/product/B00M1PNBTE/ref=oh_aui_detailpage_o01_s01?ie=UTF8&psc=1 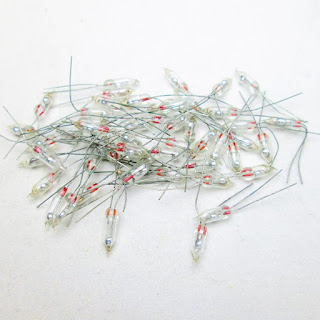 Since this is the internet, obligatory warning. Mercury is a toxic metal that can be absorbed. If you break one of these, it will be hard to safely clean up. Don't bother if you don't know why that matters.
I had two guitars I needed to update - a Rock Band 1 and a Rock Band 2 -- there are obvious external differences, and a number of internal ones. I'm only interested in the tilt switches here. In this case, Rock Band 2 upgraded the tilt sensor. It still uses the ball bearing type of sensor, but it used two larger sensors (heavier balls), and it wired them in parallel instead of series (so that EITHER switch could trigger it). It then went one further than that and added a port to the side of the guitar so you could plug in an external foot switch for overdrive - this is also wired in parallel.
Testing showed that the ball-based tilt sensors worked, but the connection was iffy. It was bouncy and imperfect. The mercury tilt switch, by comparison, works by immersing two contacts in conductive liquid metal. The connection, compared to the ball switches, was pretty much perfect and very low resistance with no bounce.
So for the Rock Band 1 guitar, it was a straight remove-and-replace. With the switches being so much better I wanted to keep the series connection so that just shaking or bouncing the guitar was less likely to generate an accidental overdrive. I then bent the leads to get the approximate angle I wanted the switches to trip at.
For Rock Band 2's guitar, the switches were wired in parallel. Again, Because I liked the idea of the series connection providing resistance against false triggers, I tied two of the leads together and wired that up, after insulating the PCB to prevent shorts. This gave me a series connection on that guitar as well. 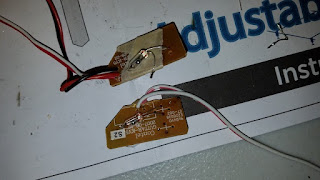 When I went to install them into the guitar, I hit another small snag... the normal orientation of the guitar meant that the switches lay flat instead of tilting, which made them trigger too easily.
Fortunately, the boards mount by means of a slot and are held in with screws with a very wide head. Friction meant I could just lay the board flat on the mount and screw it into place like that -- this worked fine. 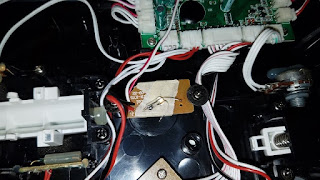 And there we go! Hooked it all up and it seems to be working just fine! I probably should have replaced the reed switches while I was in there, but we'll do that next time. ;)
Posted by Tursilion at 11:23 PM No comments:

The Programmer is not an end user

As I continue to modernize my skillset into C++11 and C++14, as well as pick up side toys like Unity, I'm more and more noticing a really disturbing trend. It took me a while to figure out what it was that was bugging me so much, and tonight I finally realized - the programmer is being treated like an end-user.

Phrases like "you don't need to know about that" and "don't worry about that" are backed up with massively complex templates that hide the actual behavior of an object. I've been going through the O-Reilly book on C++11/14, and the number of times it warns that the same line of code can have drastically different effects due to context (because of the complex templates and code features backing them) has exceeded my capacity to remember. Even the simple code editor is getting into the game with concepts like code folding, whose sole job it is to hide code not currently being worked on from the programmer doing the work.

Why? Is it really that distracting? (Actually the conspiracy theorist in me suspects it was first done so that really long files could be managed in really poorly written editors... but that's a different rant!)

The programmer is the first and often the ONLY person who can view the code and tell you what it's going to do. He or she is your first AND last line of defense. Why in the name of all things Boolean would you hide details from that person and leave them in the state of "I don't know"?

It was code collapsing that triggered me to write tonight. I've known about it forever, I even know people who use it. I chose not to, because I prefer to understand what I'm working on. But only tonight did I realize it was probably the simplest and most insidious of this deliberate attempt to "dumb down" the act of writing code, and why it was bad.

So why is that? Even if you are not working on a piece of code, the act of reading through it as you skim past can catch bugs. This has happened to me many times - especially in group projects. You see it, it catches your eye, you go "oh my god!" and you fix it, BEFORE the customer finds it.

Or, you collapse all the code except the one little function you've chosen to put your blinders onto, and the bug goes unnoticed until it takes out the internet because nobody ever bothered to look at it, despite hundreds of eyes passing over that function. Yeah, tell me that's never happened. ;)

People: LOOK AT THE CODE. That's your JOB as a programmer, for pete's sake. Keep things simple enough to actually understand, and TEST that code. Don't say "oh, that's Test Group's problem". No, Test Group's job is black box testing - to make sure the ultimate product as a whole passes a reasonable set of tests and does what is REQUIRED. YOUR job, as programmer, is to test every code path you write to ensure it does what you INTENDED. The two are not always the same, that's why you HAVE a different group.

Posted by Tursilion at 9:44 PM No comments: