I went through and verified the pinout of the cart, and burned a new AVR and dropped it on the board to test, but it's still working just as flakey. A couple of things were interesting.. one is that when it partially works, it seems to get most of the bytes right (because the program selection is mostly correct). That seems to suggest either I am lucky or the address code is working. (I suspect the latter - if I was lucky I wouldn't be having an issue).Putting the logic analyzer on it was all over the place, to the point where I couldn't make sense of what I was seeing. But I also determined that my console's power switch is wearing out... so I need to make a repair there to continue anyway.

One thing that has crossed my mind is that with the new compiler, the code may be running too fast. I check the MDIR and MODE pins immediately after detecting GSEL -- maybe that's too fast? When I get the logic analyzer properly on the bus I will recheck that theory.
This shouldn't even be an issue, but I am leaning back towards the ROM-based cart.... I just want this part to work. ;) But in the meantime, I relaid-out the cart to use the ATTINY861 instead - it's a 20 pin part instead of 14. So it doesn't look as much like a GROM, but it has enough pins to bring out the ISP header. I also positioned it so, in theory, the ZIF socket will fit on the board when in the console. I haven't ordered this board or the new parts yet though...

I probably should test programming one of the 128MB flash chips as well -- if my new programmer can pull that off, maybe I should stop wasting my time with the GROM emulation. (But darn it, this part was supposed to "just work". ;) )

Never should expect that it will, but I'm a bit disappointed and frustrated at this point.

I had two things to do today - the first was to port my GROM simulation code to the ATTINY84 that I selected for GROM boot. I thought it would be nice to have that to startup, and I could use the EEPROM for high score saving.

That port went reasonably well, and for the most part it did what I expected. Then I shut off the reset pin and discovered that I don't seem to be able to get high voltage serial programming, needed to reprogram it without a reset pin, to work. I spent several hours on this, including research and rewiring it repeatedly. I seem to recall having this issue before and eventually deciding keeping a reset pin was a good idea, but I need every I/O an ATTINY84 has. I think I may nudge up to the next physical size.

Then I went to build the cartridge prototype, and pretty much everything on that PCB was problematic.

First I detected that I didn't actually buy all the ICs I needed to assemble it. I was able to raid the parts bin but it was frustrating. Then, of course, the ATTINY footprint was too close to the IDE port to allow a ZIF socket (I always forget how big they are), and I forgot that the pins need to be larger.

I soldered leads to the ZIF socket to get it on the board, and forgot you need to do that when it's OPEN, not closed, because otherwise the sockets don't always open up for you. ;)

Finally, I got it all together and plugged it into the TI. It didn't come up reliably, it's very flakey, but at this point I think I'm done for the day. When it did come up, the data was correct. I got as far as seeing the menu entries and even getting Easy Bug to start booting, so the basics are working. Either there's some timing issue or I configured one of the I/Os wrong, or (worst case) the IDE circuitry is interfering.

Because I was too dumb to test it before I put the IDE circuitry on.

So I think the next step is to take Jim up on his layout offer while choosing a new chip for this approach, and we'll see which layout works first. ;) 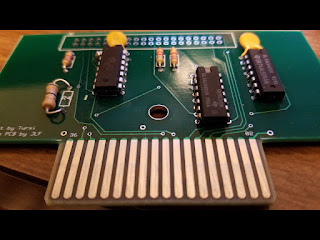 Also did a few surveys to see what people thought about dither patterns. My first favorite was shot down pretty hard, but in the second pass there are two contenders neck in neck, one of which IS my favorite. Sadly there are only about a dozen votes, which speaks lovely for the potential market of this thing. Oh well. ;)

So it looks like we'll be using an ordered dither, but in order to get around the terribly washed-out effect I was getting, I introduced back in a tiny bit of error distribution. It makes a difference in the color yet preserves the more regular patterns of the ordered dither, and I'm pleased that people like it. It's really down to whether I'll use the 2x2 or the 4x4 pattern at this point. (When I re-encoded, I'll probably just do the top four so I can change it out again at the last minute without fearing that the frame numbers might change...)

You can see the current challenge video here (if you can get past Youtube's scaling...): https://www.youtube.com/watch?v=NdO-lokD7DM